Even today, the Great Pyramids of Egypt are awe-inspiring and majestic. It wouldn’t be easy for many countries to build them now using modern technology. So it boggles the mind that these pyramids were completed in 2560 BCE. It is one of the 7 wonders of the ancient world, and it’s the only one left standing.

You can imagine how other people who first beheld the pyramids felt when they saw these huge monuments for the first time. The Great Pyramid (the biggest of the 3) is especially massive, yet the proportions are nearly perfect. It comes as no surprise that myths have arisen among many people to explain its existence. Even today, supposedly modern people believe certain myths about how these structures were built.

Let’s take a look at some of these myths:

1. Slaves built the pyramids. Or more specifically, they were built by enslaved Israelites. Many people believe this, as they’ve seen the movies. Those movies, on the other hand, were based on the accounts of Herodotus. But then the “Father of History” saw the pyramids about 2 thousand years after it was completed, and so accounts may have been distorted.

However, modern archeologists believe that the builders were actually highly regarded craftsmen of the time. Their remains were found next to the pyramids, and being buried to the divine Pharaohs was an honor that wasn’t granted to slaves. Also, the large numbers of cattle bones found at Giza was evidence that their staple food was beef, and at the time that was a delicacy in Ancient Egypt.

2. The pyramids were ancient granaries. This was the belief in medieval Europe. In fact, it was called Joseph’s granaries as far back as 500 AD.  END_OF_DOCUMENT_TOKEN_TO_BE_REPLACED

Interest in Nikola Tesla surged after the sudden rise in fame of Tesla Motors and their extremely popular electric cars. But exactly who is Nikola Tesla? Here are the most important facts you have to know:

1. He was born in 1856 in what was then known as the Austrian Empire. The place where he was born is in modern day Croatia, but ethnically Tesla was a Serb. Later on he became a Serbian-American. He arrived in New York when he was 28 years old.

2. He is now considered the true father of the modern electric age. He had 300 patents to his name and his research included a wide range of scientific topics

3. He was famous for his “feud” with Thomas Edison, as they promoted different forms of electricity. Edison was the champion for DC or direct current, while Tesla pioneered the alternating current with his ally George Westinghouse.

4. Tesla actually worked for Edison’s Manhattan lab when he came to the US. He was highly recommended, as he had studied math and physics at the Technical University of Graz. For good measure, he also studied philosophy at the University of Prague.  END_OF_DOCUMENT_TOKEN_TO_BE_REPLACED

The Coral Castle mystery has yet to be uncovered, publically that is. And there are several researchers out there trying to figure out the secrets of how Ed Leedskalnin built Coral Castle by himself and perhaps how the great megaliths like The Great Pyramids were built. The knowledge would be very powerful and revolutionary.

I’m sure that there are more researchers out there that aren’t so public but I will aim to share with you those who have been. Such as a YouTuber named “vinny stvincent”. He has attempted to rebuild Ed Leedskalnin’s flywheel as well as study from the ground up about magnetism, energy, electricity, and anything that is relative to how Ed accomplished the supposed impossible feat. He has also written a book on the mystery of Coral Castle back in the 1980’s. END_OF_DOCUMENT_TOKEN_TO_BE_REPLACED

It was made in 1923, and 1,100 short tons of stones were used. Mortar wasn’t used to fasten the stones together, yet they fit so tightly that light doesn’t pass through the joints. The lone maker made and moved stones that weighed an average of 15 short tons, and the largest ones weighed 30 short tons.  END_OF_DOCUMENT_TOKEN_TO_BE_REPLACED 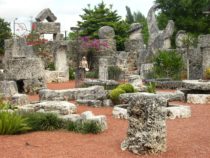 3. It isn’t even really made of coral either. It’s actually made of oolite limestone, and more than a thousand tons of it was used for the construction. END_OF_DOCUMENT_TOKEN_TO_BE_REPLACED

Coral Castle is an engineering marvel found in Florida, and it’s a very famous tourist spot. Its features and workings have fascinated generations of scientists, and it’s been the subject of book, films, and countless articles. But how much do you know of its mysterious creator? His name was Edward “Ed” Leedskalnin, and he was a man as improbable as the spectacle he made.

Here are 10 facts about the mysterious engineer of Coral Castle, Ed Leedskalnin:

1. He started working on Coral Castle in 1923. He first built a castle in that year in Florida City, and he named this castle as “Ed’s Place”. Florida City is an extremely remote location, and at the time there was very little development there. He then moved the various parts of this castle to its current location.

3. You’d think that with a thousand tons of stone involved in the construction, Ed Leedskalnin would be a huge man too. But in fact, he was small in physical stature. He was only 5 feet flat tall, and he only weighed 100 pounds.  END_OF_DOCUMENT_TOKEN_TO_BE_REPLACED